Use my location to find the closest Service Provider near me 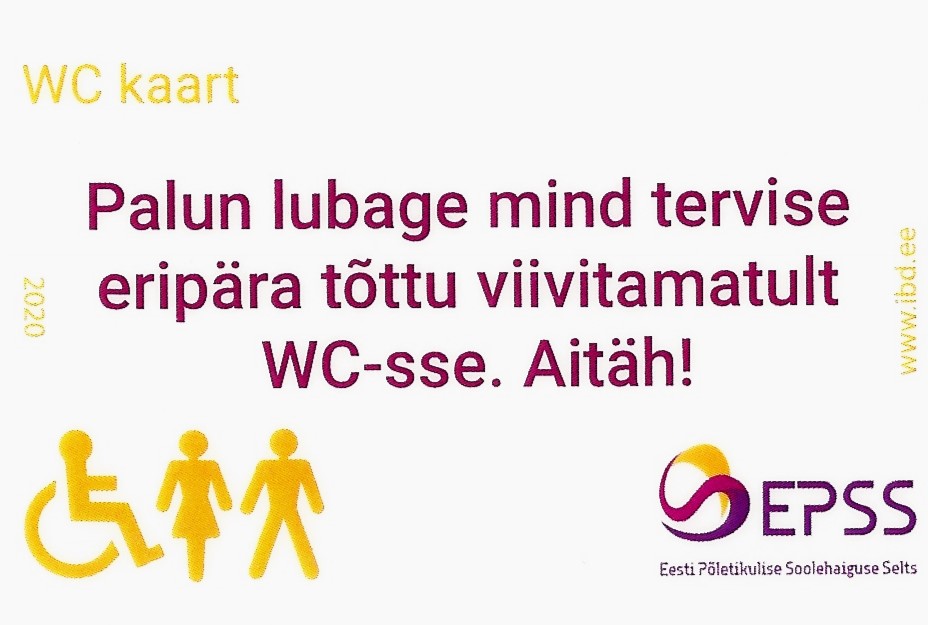 The Estonian Inflammatory Bowel Disease Association (EIBDA) started to issue a toilet access card to its members to help them gain access to the nearest toilet in times of urgency. There are about 2,500 people in Estonia who need the card every day. The card is registered and issued to a member of the association, being valid for one year.

At the beginning of May, the Estonian Inflammatory Bowel Disease Association (EIBDA) conducted a survey among its members to find out how much the bowel disease affects their daily lives. Surprisingly, one of the main concerns was the complexity of using the toilet in public places. The purpose of the toilet card is to confirm the owner’s need to get to the toilet quickly.

According to Janek Kapper, a representative of EIBDA, bowel disease patients often have concerns about how to use the toilet as fast as possible, because the need for access to a toilet is sometimes extremely urgent. “It seems strange that in the 21st century, we have to deal with such issues, because people waiting in toilet lines at events as well as public venue staff are ignorant of the concerns of bowel disease patients,” Kapper says. “Some disabilities are not visually apparent from a physical perspective and it’s very uncomfortable to explain the condition in a loud voice,” he added.
Kapper hopes that now that there are special cards available confirming the urgent need for using the toilet, perhaps awareness will raise over time and the problem will become smaller for bowel disease patients. Janek Kapper is going to ask representatives of shopping malls, public venues, cafes, restaurants and other places to inform EIBDA if they would be willing to join in and place a sticker ”Not every disability is visible” on the doors of their toilets. This would help to raise awareness of the staff in public places and avoid potentially embarrassing situations quickly for card holders. The names of the places supporting the project are visible on EIBDA website, so all the members know which are the so-called inflammatory-bowel-disease-friendly places they can visit at ease. As many developed countries use similar cards, card holders can choose to visit these places when travelling.

The aim of the recent survey was to assess more broadly how bowel disease affects patients’ daily lives. Mostly all respondents (87.5%) confirmed that they are daily affected. This includes unpleasant situations, embarrassing moments, and job-related issues. The survey was conducted among EIBDA members and included 32 patients aged 16-73. Among the respondents were patients who have had the disease for 6 months, and those who have suffered from it for 45 years already.

Ulcerative colitis and Crohn’s disease are chronic inflammatory bowel diseases. The most common symptoms are diarrhoea, blood-containing stools, and abdominal pain, as well as weight loss due to Crohn’s disease. The disease can develop at any age, but usually between the ages of 15 and 35.
The causes of the disease are unknown – it’s believed that the interaction of hereditary and environmental factors, and the peculiarities of the intestinal microflora are important for the development of the disease. Inflammatory bowel disease can’t be prevented. In most cases, the disease progresses with aggravations of symptoms but may have remissions either due to treatment or spontaneously. During the aggravation, the ability to study and work may be limited for patients, but this rarely leads to long-term incapacity to work. Information on inflammatory bowel disease can be found on the website www.ibd.ee.
EIBDA is a charity that helps patients to deal with problems connected with ulcerative colitis and Crohn’s disease, as well as to improve treatment and quality of life for people suffering from ulcerative colitis and Crohn’s disease.